Do you have a recession proof mindset?

Do you have a recession proof mindset?

In Australia we’re obsessed with the state of the economy.  It seems to permeate thinking and it’s a rare day that we won’t hear something 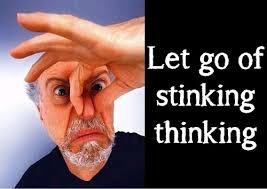 about its state in the news.

As business owners we’re especially sensitive.  When the economy slows down, we get worried that people won’t spend.

So there’s a tendency to pull heads in and shrink.

But that can be a case of stinking thinking.

When working with clients we really focus on their mindset.  Are they expansive or do they live in a constant state of fear?

We can’t control the overall economy, but we can have considerable influence on our own.  By changing our thinking.  i.e. Our mindset.

History proves that while many organisations do suffer and go to the wall in recessions, there are plenty more who thrive.

Here are some stats which prove the point going back over 40 years.

An American Business Press (ABP) and Meldrum & Fewsmith study of the 1970 recession found:

“Companies which did not cut marketing expenditures experienced higher sales and net income during those two years and the two years following than those companies which cut in either or both recession years.”

McGraw-Hill Research’s Laboratory of Advertising Performance analysed the performance of 600 industrial companies during the 1981-1982 recession and found:

“Business-to-business firms that maintained or increased their marketing expenditures during the 1981-1982 recession averaged significantly higher sales growth both during the recession and for the following three years than those which eliminated or decreased marketing.”

In 1993 Management Review polled AMA member firms about their spending during the 1990-1991 recession:

“Fortune follows the brave. Firms that increased their budgets and took on new people were twice as likely to pick up market share.”

All this is predicated on having an expansive mindset.  You have to have the self-belief as well as the courage and confidence to strike out when everyone else is pulling their heads in.

Remember, people will always buy things they want. No matter what the economic circumstances, if it’s important enough to them, they’ll open their wallets.

I should point out the obvious that to succeed you have to have a strategy that matches the right products to your market’s needs.

Which is why when working with clients we concentrate on 4 main areas which promote consistent growth.  Mindset, strategy, marketing and selling.

If you’d like help to grow your practice or business regardless of external economic circumstances, give me a call on 0414-913-334 and let’s chat.