There is a breed of salesperson I can’t stand. They’re pushy, arrogant and simply won’t take ‘no’ for an answer. 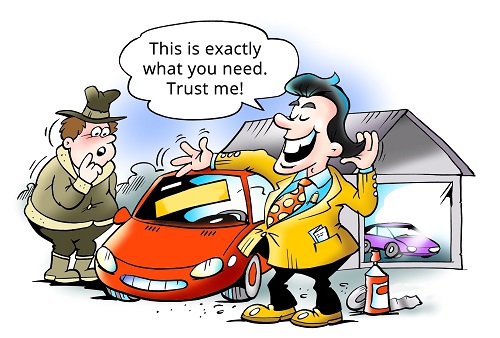 More often than not, they’re employed by share trading or make money through some sports betting scheme.

Had yet another call from one the other day.  The caller ID showed as England.  I should have known, but answered it anyway.

Typical fast talking London accent was the next warning sign.

He immediately launched into his spiel.  How they had some wonderful share market investments we should look at.

His immediate response – “You haven’t heard me out so how would you know you’re not interested? Don’t you want to make money?”

Once again, “I’m not interested in what you have to offer.”

To no avail. He just wouldn’t take no for an answer, kept insisting that his program was the best thing since sliced bread and that I really had to listen to him.

Eventually he got the message, gave up and hung up.

Honestly, people like this give salespeople a bad name. No doubt he’d get some people over the line with his tactics – mainly people who can’t say ‘no’. But whether he’d get long term business from them is dubious.

In some respects I don’t blame him.  He’s just doing his job, thankless though it probably is.

The real issue is systemic.

Mass calling an unqualified, cold list is a stupid waste of time, resources and money.

The person you’re calling has never heard of you.  You have no idea if they have a problem, are looking for a solution or even remotely qualified.  And there’s no basis for trust.  Especially if you’re selling a high ticket item.

So what should you do instead?

Say you’re like a client of ours, John who helps furniture manufacturers improve their profitability.

John knows exactly who his target is and can locate them.

Using a script and system we created, John calls the prospect and susses them out.  If there’s initial interest, he physically express-mails them a 14 page report on the issues these manufacturers have, the 3 major causes and how to alleviate them using John’s services.

The package includes a branded USB stick with a simple to use Excel spreadsheet which allows prospects to plug in their costs and selling price whereupon it spits out their profitability (or not).

About a week after the package goes out, the prospect gets a follow up call.

The call is now warm and many of these have moved forward into physical meetings where the sale is moved forward.

In other cases the prospect isn’t ready yet (usually because they’re busy fighting fires).

Rather than continually phoning, they go into our automated follow up system where they receive case studies and other examples of how issues have been fixed in organisations just like theirs.

Regular, un-threatening communication is the key to building up trust and moving the sale forward.  Remember, it can take between 5 and 15+ touches before someone buys.

Interested in knowing more about how we can design and IMPLEMENT such a marketing system in your business?