Most people thinking of “geniuses” think of people with extraordinarily high IQs. 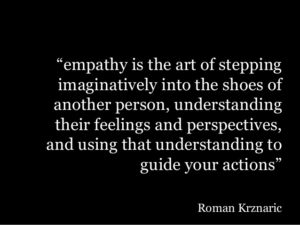 Organisations will often inflict IQ tests before hiring to “measure intelligence”.  But very few measure EQ or Emotional Intelligence.  A person’s ability to deal with people.  Which frankly, if the person is being hired for a management, marketing or sales role, is a colossal mistake.

Persuasion almost never comes down to the “cleverness” of your argument.  It’s your ability to “get into the other person’s shoes”, understand their point of view and then gently bring them around to yours that will bear fruit.

What follows are three stories where a lack of emotional intelligence, being pedantic and rigid cost the people involved dearly.

John lost a 3.5 million dollar deal because of 27 dollars and 35 cents.

The organisation involved held a conference with John as the keynote speaker.  He did a good job, and there was a 2 year gig on offer.

CEO says, “Before we get into the details of engaging you further I have a question about the invoice.  Rate’s good, airline tickets and accommodation are fine… all good.  But what’s this $27.35 for?”

“Well that’s the phone bill for all the calls I made to you.”

“The phone bill?  What did you do?  Go down and check off each call?”

“Yeah – it’s part of the expenses”

“Oh, I just thought it was overhead – we are looking at a $3.5 million dollar deal.  So you’re sure about this?”

“That’s the courier charge for getting you the proposal.”

“Oh, that’s when you stuffed up, didn’t get me the proposal on time and had to overnight it?”

CEO looks at his assistant and says go cut John a cheque for the keynote.  Then tells John he has to go to another meeting.  $3.5 million just went with him.

John was so oblivious to what had just occurred he still thought he was going to get the deal.  Thinking like an old school “professional consultant” where every 6 minutes is charged and every photocopy paid for, he completely missed the cues.

Bill referred Simon, an IT specialist onto an organisation where he won a deal worth around $100,000.

A while later, Bill had an issue with a laptop and asked Simon for help.  Simon fixed it and sent an invoice for $130.  When it wasn’t immediately paid, sent him a “final notice”.

Both John and Simon lack a key ingredient for success – emotional intelligence.

In neither case were they aware of the emotional effect they were having on other people – be it prospects or excellent referral sources.

Sadly, they were both penny wise and pound foolish.

We all have an internal injustice meter.  If we feel something is unfair or we’re being hard done by, watch out.  We might not say anything, but whoosh is the sound of potential business going out the door.  Don’t let it happen to you.

Bill made a very astute observation to me.  “Many business owners have no understanding or appreciation of the life cycle of a client – and don’t grasp the concept of lifetime value.  They think in the moment rather than long term – penny wise and pound foolish.”

And I have to agree.  Figuring out your customer’s lifetime value is something we continually stress with all our clients.  It gives you a framework to make emotionally intelligent decisions when it comes to how you deal with people.  Long term versus short term thinking.

P.S. Need help figuring out who your best customers really are and what their lifetime value to your business is?  Our Two Heads consultations will set you on the right track.  Call us on 0414-913-334 to get started.