A very successful business mentor of ours was fond of saying, “Business is easy, but people are complicated”.

Put another way, we are all skin-bags of emotions.  And our emotions can either empower or disempower us.

We’ll start with a model of human interaction, the Drama Triangle, which disempowers us.  And then present our Empowerment model which does the opposite so you can be the best version of yourself.

The Drama Triangle was first described by Stephen Karpman in 1968.

The drama plays out in families, friendships and business and has three roles. 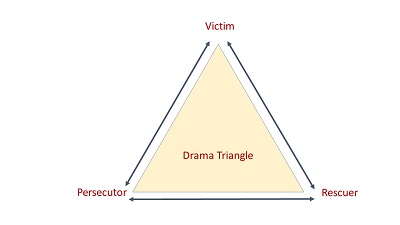 The Victim: The Victim’s stance is “Poor me!” The Victim feels victimized, oppressed, helpless, hopeless, powerless, ashamed, and seems unable to make decisions, solve problems, take pleasure in life, or achieve insight.  The Victim, if not being persecuted, will seek out a Persecutor and also a Rescuer who will save the day.

The Rescuer: The rescuer’s line is “Let me help you.” A classic enabler, the Rescuer feels guilty if they don’t go to the rescue. Yet their rescuing has negative effects: It keeps the Victim dependent and gives the Victim permission to fail.  When they focus their energy on someone else, it enables them to ignore their own anxiety and issues.

The Persecutor: (a.k.a. Villain) or bully.

The Persecutor insists, “It’s all your fault.” The Persecutor is controlling, blaming, critical, oppressive, angry, authoritarian, rigid, and superior.

The game starts when a person takes on the role of a victim or persecutor.  Which then often encourages a rescuer to well… become a knight in shining armour.

However the roles are not static and can shift in an instant.  The victim might turn on the rescuer, for example, while the rescuer then switches to persecution.

Rather than go into the psychology of why we play these roles, I recommend becoming aware of them and then deciding not to play the game which ultimately disempowers you.

Enter our Empowerment model of Courage, Confidence and Conviction. 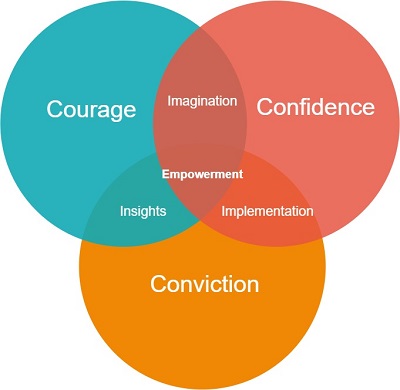 To be the best you can be, you have to develop the courage and confidence to stand your ground.  To never take on the roles of victim, persecutor or rescuer.

In business this means taking responsibility and being accountable for your actions.  If you’ve stuffed up, admit it, figure out a solution and move on.

Don’t shift blame onto others or persecute them for making mistakes.  And certainly don’t rescue them.

Your role as a leader is to empower your people.  Encourage them to take responsibility and have them figure out their own solutions rather than constantly coming to you.

Give the necessary authority, allow mistakes and recognise that’s when we learn the most.