This origin story grew their company 45% year on year… What’s yours?

This origin story grew their company 45% year on year… What’s yours?

Milk.  It’s the ultimate commodity.  Especially when Woolworths and Coles slashed their private label prices to $1 per litre in 2011. 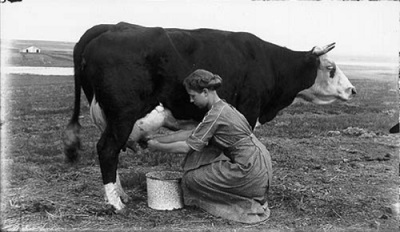 Which in turn put immense pressure on their dairy farmer suppliers.  Many of whom went broke.

But one dairy farmer isn’t playing that game.

In a recent interview I heard him say, “We don’t sell a bottle of milk.  We sell the story behind our family as 7th generation farmers.  Our customers want to buy a milk product that is real, that has a history, a story behind it.”

As a result they’ve grown about 45% per year after that.  Pretty significant in a supposedly price driven, commodity market.

If you can emotionally connect your prospect’s positive feelings to your product they’ll be far more predisposed to choose you over your competition who doesn’t.

And it doesn’t matter what your product or service is.  Commodity or Rolls Royce.

There are two basic types of marketing stories.

Origin stories espouse your history, your values, where you came from and where you’re going.

They answer the questions, “Who are you and why should I care?”

But you don’t have to be a global brand to tell your origin story.  Far from it.

All of us have a story about where we came from and why we do what we do.  By sharing this with your prospects and customers you bring them “into the tent” with you.  They get to understand why you do what you do which can evoke positive feelings towards you.

The second type of story is based around production.

I guarantee that the vast majority of your prospects and customers have absolutely no idea what goes into producing whatever it is you sell.

As such they can’t truly appreciate the reasons they should from you instead of your competitors.

Unless you tell them!

How this technique was used to sell beer 100 years ago.

Advertising legend Claude Hopkins revolutionised the sales of Schlitz beer in the early 1900s by being the first to describe how beer was made.

He toured Schlitz’s operations and in particular, highlighted processes that supported Schlitz’s main claim: that its beer was pure.  The campaign was a huge success.  Within a few months, Schlitz went from fifth place to being tied for first in the market.

This is one of Hopkin’s ads.

In this video, Apple’s Senior Vice President of Design passionately describes, and shows us how the body of each MacBook Pro laptop is carved from a single block of metal increasing the reliability and robustness of the laptop while allowing it to be lighter and smaller.

The bottom line is whether you want to bring a new product to market or increase your market share in a highly competitive arena, using both origin and production stories will help you in two ways.

The first is prospects will emotionally relate to you, evoking feelings of warmth, encouraging them to choose you.

The second is your clients who’ve already bought will continue to do so as they feel their decisions have been validated through knowing your origin and production stories.

Want help articulating either?  That’s what we do at Revealed Resources.  Give us a hoy on 0414-913-334 and get your story out to the world.