The Tortoise and the Hare

The Tortoise and the Hare

The crowd was hushed. The anticipation was palpable in the air. The Hare had finally convinced the Tortoise to race him in the national cross country carnival. 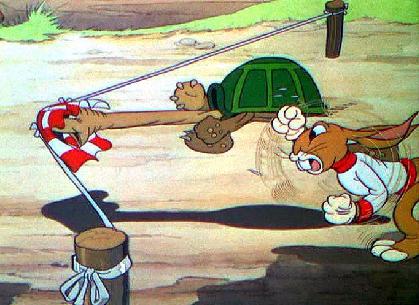 The starter’s gun went bang. The crowd roared as the Hare took off at a sprint, then fell silent as they watched the Tortoise just sitting there, looking unconcerned.

Finally, after much encouragement and prodding, the Tortoise slowly put one foot in front of the other and started down the course.

The Hare being a dominant sort of fellow, know it all type who liked to be out in front (even if no one appeared to following), had taken off. But as we well know the story, he pretty soon got distracted, found all sorts of interesting carrot patches along the way, decided to provoke and tease Elmer Fudd and get into all sorts of mischief.

And of course forgot all about the race.

The Tortoise just kept plugging along, nothing excited him very much, and he just kept his eye on the course. And crossed the finish line well before the Hare, who’d got involved in so many different projects along the way, had frankly even forgotten about the original objectives.

Like the Tortoise, people with high “Steadiness” styles scores want a steady pace, security, and do not like sudden change.

They are slow to anger and make excellent bosses as people love to work for them.

However, they have a quiet will of iron, so don’t try to ramrod them into something they disagree with.

So when dealing with a high “Steadiness” person always…

So if you’re a dominant type, slow down and don’t try and steam roll a high “S” personality. You may think you’re getting your way, but ultimately, they’ll do what they want to – and can be as stubborn as a mule.

As an Influencer, chat away by all means, but realise that while high “S” are great listeners, getting them to respond with expressive emotion is usually a waste of energy on your part. So don’t expect enthusiasm for all your wonderful schemes.

And if you’re a high “C”, Conscientiousness type, give them detail, but also lead them to make a decision. High “S” types are notorious for not wanting to make decisions and often need to be forced into action.

Here are some well known examples of the steadiness type…

Charlie Brown – Yes, a fictional character – but we all know just how steady as she goes he is!

Mother Teresa who just took everything in her stride looking after the destitute in Calcutta. Nothing seemed to faze her and she just got on with it.

Gandhi – who is a model for a peaceful, extremely stubborn individual who lived the slow and steady wins the race. He took on the might of the British Empire and ultimately prevailed through simply never veering from his path.

And when it comes to well-known TV Shows notice each has at least one character of each personality type. Which of course add to the drama!

Remember, these are just models and useful constructs to help us deal with people. We are not our personality types so please don’t go around labelling people!

And it should go without saying, (but I’ll say it anyway), these principles are a small portion of what we teach in our advanced sales and persuasion skills workshops.

Other aspects of persuasion include how to rapidly gain rapport, elicit buying criteria (so you know what really motivates them to buy) and navigating complex, high value sales.

Like to know more? Call us on 0414-913-334 and we can help rapidly improve your (and your team’s) sales and persuasion skills so you have more people willingly buy from you, faster.