How to create the ideal team

How to create the ideal team

No matter what your organisation produces, be it a product or service, you have to continually innovate or someone else will disrupt you! 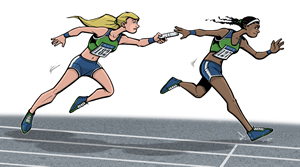 As the world moves ever faster, it is your ability to rapidly create and implement new products and ways of doing things that will keep you competitive. And like it or not, no man is an island and it will take a team to move from idea to production, to getting traction in the market.

And there’s the rub.

Teams are made of people – all of whom have their own personality styles and ways they add value to the process. Get the mix wrong and you’ll either run around in circles without getting any tangible results and/or go down rat holes wasting time and money.

Over the years we’ve been brought into many organisations to facilitate teams having issues working together. These people have been at the top of their game technically – some amongst the brightest in the world, but sadly technical expertise does not mean they know how to communicate!

So one of the first things we look at is how they interact and value differences in thinking styles.

We do it by looking at their personality types, and how each type fits into different aspects of the creative, planning and implementation phases of any project, be it a marketing implementation or creating a brand new product or service from scratch.

As you read the descriptions, see which ones you relate to.

They have a “take no prisoners” approach, don’t suffer fools gladly, like to get to the point quickly, lead from the front etc. They often act like a “bull in a china shop” and bulldoze their way through life.

These people are not interested in fluff. They want the big picture and details often bore them.

Chatty, often touchy/feely, they are the life of the party. They like to talk and communicate openly. They have good senses of humour, are cheerful, enthusiastic and demonstrative. They laugh a lot, are sincere at heart and like a sense of fun.

Facts and figures bore them! They’re far more likely to make decisions based on whether they like you or not. Emotions to the fore!

Conscientiousness types adhere to rules, regulations, and structure. They like to do quality work and do it right the first time. They are careful, cautious, exacting, neat, systematic, diplomatic, accurate, loyal and tactful. They tend not to be overtly emotional.

Like a Dominance type, these people are not interested in fluff. However, unlike the Dominance type who just want the big picture, high C’s revel in the detail. They will pore over every last bit of information you can provide, read every review, so the more detail you can provide, the better your argument will be.

And finally Steadiness types who want a steady pace, security, and do not like sudden change.

They tend to be calm, relaxed, patient, possessive, predictable, deliberate, stable, consistent, loyal and tend to be unemotional and poker faced.

They are slow to anger; however they have a quiet will of iron, so don’t try to ramrod them into something they strongly disagree with.

So what does it take to create an ideal team?

The best teams contain a mix of personality types that complement each other. In addition, you need to play to individual personality strengths at different stages of the innovation-implementation process.

Let’s start with high D’s – who tend to be spontaneous and practical.

Every team needs at least one high “D”. They are especially useful in the creative phases of the project as they have a very high need to achieve and are generally very competitive and ambitious.

Being action orientated, they’ll look for the most efficient ways of implementing objectives, often with a “damn the torpedos” approach to rules and regulations.

While one of their key strengths is being able to choose the highest priority ideas and swiftly trying to implement them, the downside is they often don’t think everything through and could end up with a half-baked solution.

As such, they really need other people to follow along, pick up the pieces and get things done.

A team full of high “D’s” would be full of leaders and no followers. Each would constantly jockey for position and for their ideas to be the ones adopted. Very high “D’s” can be very domineering and even overbearing at times.

The high “I’s” greatest strength is in generating fresh, original concepts that go beyond the obvious.

They are big picture thinkers and want freedom from traditional constraints and are not afraid to break the rules when they feel it’s necessary. They’re impulsive and let their feelings guide them.

Like the high “D”, high “I’s” can move from one idea to the next without fully evaluating the consequences.

So you can imagine having a team comprising of high “D’s” and “I’s”. Lots of ideas and not much follow through.

To balance out the high “I’s” creative approach, you need a high “C” Conscientiousness type who will challenge the concepts under discussion.

Consequences matter to the high “C” and they want to plan the implementation, and being relatively risk averse, prepare for surprises. In effect they bring a degree of realism and critical thinking to the party.

Preferring order and being methodical, a high “C” likes the mental exercise of debating ideas and forcing people to drill down.

The high “C’s” greatest strength is in figuring out the problems before they occur and how to improve the implementation to ensure success.

However, if allowed to dominate, the high “C” could opt for low risk ideas with lower payoff than the more risky alternatives generated by the high “D” and “I”.

Therefore a team of high “C’s” would get so lost in the detail, nothing would ever get finished as perfection is never attainable.

Every team needs at least one to get things done.

High “S’s”, being steady as she goes, are great at following up and actually implementing what’s been decided.

Being calm and methodical they pay attention to details and ensure the plans follow an orderly process. They excel at spotting overlooked problems before they occur, minimising inefficiencies and errors during the project’s implementation.

However, don’t make the mistake of involving the high “S” too early in the process. They’ll get bored and are likely to switch off in the creative and critical stages.

High “S’s” need direction and if this is lacking will tend to lose sight of the bigger picture and pursue irrelevant goals and strategies.

Which is why your teams need to comprise of individuals at least one of each primary strength to balance out the others.

People to come up with the ideas, figure out practical solutions, look for problems, mitigate risks as well as people who can work out the details and actually implement.

Anything else leads to dysfunctional teams that are doomed to failure.

So if you’re struggling with teams that are not preforming to your expectations or indeed have teams that are doing well, and you want them to do better, engage us to facilitate the process.

Our experience ranges from working with multi-national corporations down to small businesses turning over a few hundred thousand dollars a year.

No matter what the size of the company, people are people and the principles remain the same. Get people working together well and the world is your oyster!

Call us on 0414-913-334 for a confidential discussion and get your innovation happening.

One last thing before we go…

We’re often called in to mediate disputes between individuals when personalities clash for some reason. (Could be peers or boss/subordinate)

On every occasion we’ve helped each party understand themselves and what sets them off and how their behaviour does the same to the other party. Once people realise that communication is a two way street, most things can be resolved.

And in a couple of cases we’ve stopped a boss from firing an employee because they didn’t get along (often a high “D” boss with a high “C” employee). Upshot? In every case the employee moved on to being the most valuable member of the team and are integral to the smooth running of the business.

So if you’re experiencing team conflict, we can help you resolve it.