When do you give up? Could success be just 5 minutes away? The next phone call? What’s your level of grit, determination and resilience? 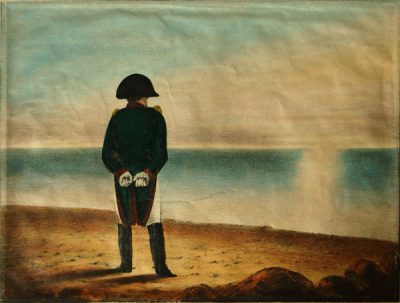 My thanks to Greg Woodley for reminding me of this story.

After Napoleon Bonaparte’s army was defeated and the Duke of Wellington prevailed over the French, Napoleon was imprisoned on Elba Island.

One day a group of newspaper reporters came to visit him.
They had obtained permission to hold an interview with the famous French general.

Even though Napoleon was in prison, he carried himself with dignity and looked with piercing eyes at the group of reporters gathered there before him.

Questions were asked and answers given. The reporters wrote every word down. This would, indeed, be good reading.  They would boast to their children and grandchildren how they
stood before the great general on that long-ago day.

Suddenly, from the back of the room, a voice, somewhat
more gentle than the others was heard above the din.

“Mon general,” the reporter said,
“Tell me why the English won at Waterloo. Did they have a superior
army?”

“Well, did they have better weapons?” asked another reporter.

“No!” was the answer again.

Then the first reporter asked,
“Why then, Mr. General, did the English win?”

Napoleon’s eyes slowly swept across the room.  The silence was so deep that it was almost deafening.  You could have heard the proverbial pin drop.

Then he replied, “The English fought five minutes longer.”

Sometimes you just need to stick at something longer than you think!

But not being rigid about it.  Look at things from different angles.  Get outside perspectives.  Be agile.  That’s what builds resilience.