Why you should stop selling and do this instead…

Why you should stop selling and do this instead… 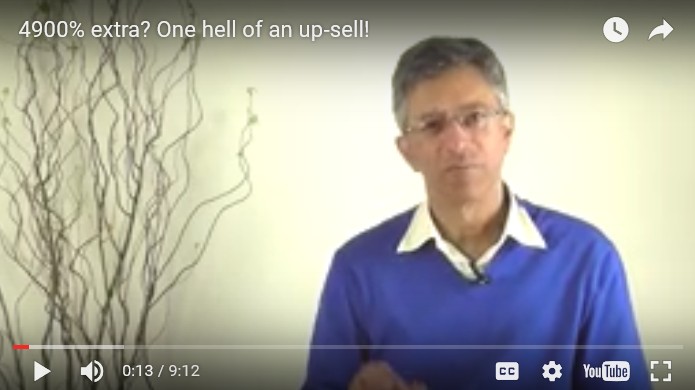 Many years ago Barbara and I experienced one of the best examples of “letting us buy” in our lives.

And the best part? The chap wasn’t even a salesman.

Alternatively, you can read it below…

Here’s how it played out…

Have you ever walked into a shop looking for something small and inexpensive, and found yourself handing over your hard earned cash for something really expensive that wasn’t even on your radar initially?

Come on, be honest. It has happened to you at least once in your life, hasn’t it?

This is the story of Carlos (not the jackal), but a really good vacuum cleaner salesman. Okay, you’ve probably got a stereo typical image of a door to door salesman, but nothing could be further from the truth. Carlos demonstrated some key sales principles which I’ll get to later.

First let me set the scene.

We needed some vacuum bags for an old Wertheim Vacuum Cleaner which was a bit battered after 15 years, but still worked fine.

So off we trotted to a local Godfrey’s store.

As we’d just moved in to our new home which had an open fireplace, we thought we’d buy a reasonable quality second hand cleaner to vacuum the hearth.

Looking at the cleaners, I realised they were mainly cheap models (surprise, surprise) and as an engineer, thought they looked flimsy and wouldn’t last.

Now along came Carlos. Picture a short, stocky Spaniard with a jovial personality.

His first words were, “I’m not a salesman – I’m just a technician who fixes these things”. As an engineer, I immediately related to this and felt I could trust his professional opinion regarding quality and reliability.

His next statement – “You get what you pay for – See that model? It lasted 2 hours! Sure it comes in pretty colours, but it has no power and the motor burned out.”

Here’s someone I could trust who wouldn’t try to palm off junk on me.

By now I’d told him I had an old Wertheim and I knew what he was talking about regarding quality.

Carlos was smart. He now knew that I was wanted quality and longevity (and were very happy with a Wertheim) so he suggested we look at some newer models “just to get an idea”.

So we did the usual picking up sand, wool etc. from the carpet using a variety of well known expensive models. None of them did a particularly good job.

While this was happening, Carlos was asking us questions. (Another fundamental of a good salesperson.)

“Did anyone in the family have asthma, allergies? Did we have pets?”

By now we’d got through the “other” cleaners, and were about to test a top of the line Wertheim.

We told him that dust mites were a problem, and he said that his daughter suffered badly from a dust mite allergy with asthma symptoms and that the Wertheim had a triple sub micron filter that fixed the problem.

Naturally, we asked how. Well, he said they left the cleaner running on low ALL NIGHT filtering the air in the room and his daughter slept very peacefully. You can imagine our reaction. run the cleaner ALL NIGHT?

Brilliant strategy! Carlos appealed to my sense of engineering and quality. He told me in an indirect way, using the metaphor of his daughter’s allergy, how reliable the machine was.

Of course we tested the machine and it was the only one to pick up all the sand and fluff. So it obviously worked.

Godfreys have a famous ad they run where they pick up a bowling ball with the hose to demonstrate suction.

Picture this model: It’s solid, with an opening for the hose on the top. Carlos turned it on full power, slapped his large hairy hand over the hose opening and picked up the cleaner and danced around the room with it hanging off his arm!

Both Barbara and I fell about the floor laughing hysterically! As a performance, it was masterful.

Carlos put the cleaner down and while we were still on a high came the really clever bit.

“Wertheim knows that its existing clients are the best advertisement for its quality. As you already own one, the company is offering a $500 trade in on a new model, but this offer is only valid till the end of the weekend”

Barbara and I exchange looks, “a $500 trade in on our old machine? That was a really good offer”, and a tacit decision to buy was made.

Now some of you will think this is ridiculous, we decided to buy an obviously expensive cleaner without knowing the price, but we did! He told us the normal retail was around $1300.

We thought “wow, that’s a good deal”, so forked out $800 for the cleaner, (when we thought we were going to spend $15 on bags), and drove home, the proud owners of a brand new toy.

Let’s analyse this a bit more. Generally we buy based on emotion and justify the decision with logic.

We “wanted” the cleaner. Carlos had made us laugh. He was personable, had an air of trust – “He wasn’t a salesman, he was a technician and so could be trusted”.

He found out what was important to us individually and pitched his message to EXACTLY the criteria that were important to both of us. Reliability, cleaning power etc. We justified the purchase in our minds by telling ourselves that it would last at least 10 years, so what was $80 a year?

What was most important is that he didn’t try to SELL us the cleaner. He allowed us to BUY.

We knew what was going on, but it was so funny we went along with it knowing exactly what he was doing. (I often wonder if he did himself, or if he was just a natural. He really was a technician – I rang his area manager and congratulated him on the skill shown).

In the end we both had the last laugh which is important as there’s not been a moment of buyer’s remorse. Carlos made his sale, and we’re thoroughly happy with the purchase,  over 12 years later.

Is your sales process up to scratch? We’ve coached and trained hundreds of sales people in the art and science of generating more business.