Is “I couldn’t do that” holding you back?

Is “I couldn’t do that” holding you back?

The old Abbot is performing a tea ceremony with the young novitiate.  The Abbot pours the tea until the cup overflows and continues to do 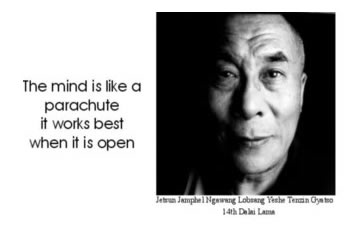 so.  Novitiate exclaims, “But Abbot, the cup is full, why are you still pouring?”  “Well my son, this cup is like your mind.  If it is full, until you empty it, I can’t put anything more into it.”

Over the years it never fails to surprise me how many people are like the novitiate.  They are entrenched in their mindset, complain that business is not going well and refuse to see other possibilities.

Case in point is a chap who runs a styling agency in the US. Most of his clients are Silicon Valley hot-shots who want to present a better personal image – through their clothes.

He has about 45 clients and charges $9K for the first year and about $6K for subsequent ones. He was looking for ways to encourage clients to keep working with him after the first year.

Currently all he does is send them emails when the year is up. And wondered why he wasn’t getting that much of a response!

I had two suggestions.

Why not create a nice gift box with a personalised invitation to continue letter on expensive stationery and include a bunch of other case studies of people he’s helped. Then FedEx it out. It would sure get opened!

And hold a cocktail party for his clients in an upmarket venue. Get them to come dressed in what he’s recommended and invite some of their friends who’d be in his target market as well.

Not only would his clients love this, but it would provide a fantastic low key networking opportunity between them. And him being the host would get all the kudos for bringing them together.

At the function he could do a quick 5 minute welcome cementing his place as the leader.

And if he didn’t want to foot the whole bill, his clients collectively spent hundreds of thousands of dollars at retailer Nordstrom, so why not ask them to co-sponsor the event?

BTW, I got this idea from legendary marketer, Dan Kennedy who related how a Speaking Coach filled his practice by doing exactly this once a year at the National Speaker’s Convention in the US.

Nothing new under the Sun. And the prime reason we all need to associate with and learn from people outside our direct industry and sphere of influence.

But back to our protagonist.

You could see the shutters coming down. I could almost hear the, “But my business is different” roiling in his head. And nothing we could say would persuade him to give what we were suggesting a go.

“No, I can’t do that. My clients all want me to be their secret weapon and not have others know they clothe me.”

“Really? Why don’t you give it a go. If you craft it correctly I’m sure you’d be surprised at how many people who come.”

The biggest impediment to success in any field is a closed mind. It won’t work here. And other bullshit.

But you’ll never know until you give it a try.

Need help expanding your mind and coming up with different promotions?