How to avoid miscommunication

How to avoid miscommunication

Ever been frustrated that someone just “didn’t get” what you were trying to explain?  Or vice versa? 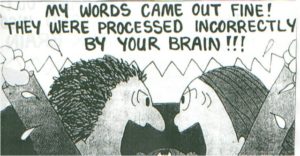 You’re both speaking the same language.  But it’s like those old movies where the British tourist thinking he’s not understood just shouts louder and louder.  Pointless.

Yet it happens every day in sales conversations.

You think you’re getting through.  But you’re not.  And most often you’ll never know it.

Reminds me of the first time I came up against this.  When I had no idea of what was going on.

Gary was the head of the NZ Banking Clearing House. Obviously no fool. I was the lead consultant on a major project setting standards for Cheque clearance in NZ.

He was a Kiwi. Me an Australian. We both spoke English. Yet he just couldn’t seem to understand what I was saying and certainly didn’t want to read the 200 page report I’d written at his behest.

What was going wrong?

Gary riffled through the report and the conversation went along these lines:

Gary – obviously frustrated… “Rashid, I don’t want to read all this. Just paint me a picture will you.”

He’s using his hands to draw a rectangle in space illustrating the point.

Me: “But, I’ve written all the information here in this document. There is an executive summary so what more do you want?”

The conversation went round in circles, both of us getting more frustrated with the other.

If only I’d known then what I know now about how different people process information things would have gone a lot smoother and we’d both have felt heard and understood.

So what was going on?

We all know about the 5 primary physical senses. Seeing, hearing, smell, taste and touch.

What I didn’t realise was how much weight we give to different senses when taking in information.

Some people tend to favour seeing or their visual sense, preferring pictures. Others prefer sound and words. Yet others like physical examples, something they can touch, feel and get their teeth into.

Then there are the Auditory Digital people who love analysing, appear remote and hardly seem to show emotion.

Smell, one of the most visceral of the senses is almost in a category of its own. Smell has a unique way of instantly transporting us to old memories – be they good or bad.

He wasn’t going to read 200 pages of single space type! He wanted a simple pictorial representation of what I was recommending. Something he could take in at a glance. Then if he wanted more detail he could ask for it.

But I didn’t realise this and rather than taking the hint and drawing diagrams, kept pushing more and more words his way. A complete mismatch in communication and a lousy way to try persuading someone to your point of view.

So how do you recognise someone with a visual preference?

So they’re more likely to look closely at you when speaking. Often they will look into the distance focusing on something imaginary. They’ll use their hands to draw pictures in the air or even on paper.

As a picture says a thousand words, they process information quickly and can be relatively fast speakers.

They also use visual expressions such as:

‘I get the picture.’

‘That’s a sight for sore eyes.’

So why is knowing this important and how can you use it?

All persuasion and understanding is based on the quality of your communication. And while communication might be considered a two way street, it is up to you as the persuader to get your point across in ways that your audience vibes with.

In short, treat people the way they want to be treated – which means communicate in ways they can comprehend and not have to translate. Even if it’s English to English in my example with Gary where I was communicating in words (auditory) to his need for pictures – visual, it’s still a translation in Gary’s head.

Knowing a person’s preferred communication styles (and we use all of them to varying degrees), means you can create marketing material to match. Your sales presentations will take into account their preferences, leading to greater levels of rapport.

You’ll be on the same page as them and they’ll feel understood. And remember, we all buy primarily on an emotional level from people we like and trust. Get it wrong and you risk miscommunication and losing the sale.

Over the next few weeks I’ll be going over the other styles, how you can recognise them and use them to enhance your persuasion skills.

Having said that, this is but scratching the surface. We go into significantly more depth in rapport building language skills, thinking styles and eliciting core values and motivations in our sales coaching programs.

Our programs suit both business to business and business to consumer sales scenarios and are guaranteed to improve your qualification and closing rates, making you more money.