Meet Carl. He’s a wonderful relationship builder who enjoys talking to prospects and clients. People are always willing to chew the fat with him and enjoy his calls. 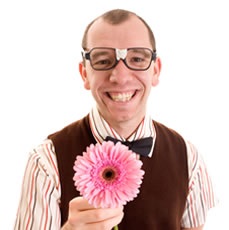 Carl’s great when it comes to customer service. Nothing is too much trouble. He’ll visit client sites at the drop of a hat, fix equipment, and do whatever it takes to be a “nice guy”.

He’s always on your  side as a client. Maybe even a bit too much – he sometimes takes your side against the organisation he works for.  A real “pleaser”.

Many organisations have Carl’s in their midst. Valuable employees if they’re used in the right roles.

But many a sales manager will tear their hair out trying to get Carl to meet his sales targets.

Before I get to why, here’s a quick recap regarding hardwired Innate Abilities or Talents which each sales person must have in the right combination. Click the links for more…

He has two major preferences which make him great at customer service while hindering his sales performance.

In the Persuasion stakes he’s a “pleaser” not an “advisor”. Great at forming and maintaining relationships, but not good at taking charge and telling the customer the next step is “to buy”.

His Executive Rapport ability is low. He finds it uncomfortable and intimidating to speak to someone he perceives to be an authority figure or at a higher socio economic level. So he’ll never ask for them even though he “knows” this is what’s necessary.

Over the years, I’ve met many “Carls”.  Two standout examples come to mind.

Selling pharmaceuticals into pharmacies Carl spends his day on the phone talking to prospects. Some of these he’s been speaking to for over a year without getting an order.

When we analysed who he was talking to we found he invariably spoke to one of the front counter staff who had absolutely no authority to purchase anything.

And rather than ask for the pharmacist in charge or person responsible for purchasing, he’d keep calling people who didn’t have the authority or ability to approve buying decisions.

In another case, every “salesperson” was a “Carl”.  “Selling” industrial equipment, they’d drive for miles to deliver spare parts, meet with people on the shop floor, but never communicate with someone in authorit, a real “buyer”.

Net result? Lots of activity but they’re unlikely to make their sales targets.

Sam is a consultant who’s very comfortable speaking with senior executives in large multinationals. Having been a CFO in a fortune 500, he knows his way around the executive suite.

Sam was wooed from his position into a top tier consulting firm because of his background and contacts.

What Sam didn’t realise (and possibly the firm didn’t make crystal clear) was that Sam was expected to not only consult, but sell – i.e. bring in new clients from his contact base.

But Sam is struggling big time.

Yes he’s used to dealing with these people – but as a peer and consultant. He wants to impart his expertise, indeed that’s what he lives for. But asking for money in return (i.e. closing the business) is an anathema to him.

Sam doesn’t consider himself a “salesman”. So while he has a high Executive Rapport preference, he’s still a Pleaser and a square peg in a round hole in this role.

Too bad for Sam and the organisation he works for as he’ll never achieve his potential here.

The organisations provide support structures that help both Carl and Sam play to their strengths.

If I were coaching Carl I would do two things as a sales coach.

Sam is already an authority figure.

I’d help him move from “peer” to “advisor” using a combination of selling process and having him understand he wasn’t serving his “clients” if he didn’t sell them something that he knew would benefit them. A mindset every successful salesperson embodies.

Now you may wonder if there’s any such thing as an ideal combination?

Frankly, there isn’t. It all comes down to picking attributes that suit the role.

A high Advisor who has a high Executive preference selling to Mum’s and Dad’s may well intimidate them by being overbearing and super confident.

In this case you’d look for someone who has authority, but with the common touch.

And for those of you who already have sales teams, we can improve your performance through a combination of training and ongoing coaching.

Our ongoing coaching embodies new attitudes, beliefs and skills which have dramatically improved the results our clients have achieved. Unlike traditional training where attendees “forget” almost everything once they leave, our coaching provides long term, consistent improvements to your bottom line results.